By adminSeptember 26, 2019Weekly Update
No Comments 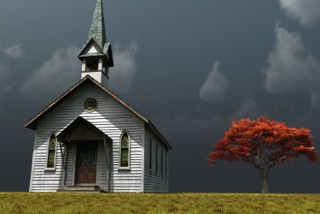 Worship in America: The Gospel Church

Over the past couple weeks I’ve been catching bits and pieces of Ken Burn’s PBS documentary, “Country Music.” As with so many of his explorations of American history, one of the things Burns does best is connect the story he’s telling to a larger story, often finding surprising tendrils that would otherwise get overlooked. In this current piece, I’m surprised at how often he goes back to church—not in the capital-C “Church” sense, but rather in the little-g-and-c “gospel church” sense. Repeatedly, Burns will frame a discussion about the origins of country music with a montage of images that intertwines worship in southern white churches with similar scenes in southern black ones. The soundtrack will often cross-fade between audio of a white church and then a black one singing a hymn like “Will the Circle Be Unbroken”.

The seamless marriage of sound and images makes its point. For all practical purposes, the gospel church is the American church. Whereas other worship streams—mainstream Protestant, Roman Catholic, and Orthodox—are rooted in European traditions, the gospel church is as much a homegrown phenomenon as jazz and blues and country and bluegrass.

How we do church in the US—even in more traditional Protestant, Catholic, and Orthodox settings—is important, because it represents many things that American culture as a whole has refused to resolve about class and color and shared history. The gospel church’s influence spreads into the “high church” in ways that, quite possibly, its constituents may not recognize. (In fact, it seeps into faiths beyond Christianity. Flavors of the gospel church can be depicted many American Judaic, Islamic, Hindu, Buddhist, and New Thought congregations.) And all of this springs from an accidental mash-up of 19th century revivalism, slave religion, and a very American recognition that entertainment and worship are not adversaries.

Purity is not something we do very well on our side of the pond. Yet our eagerness to experience, embrace, adapt, and invent has resulted in a worship style that now dominates evangelical religion and is surging ahead in other streams of Christianity.

So what makes the gospel church indubitably American? What spurred its innovations and adaptations of Christian worship? What do we need to understand in order to recognize why all of this matters? That’s our focus at this week’s Gather. Don’t miss it!

Join us this Thursday at 7:30p as we conclude our series “Words & Music”—a look at worship from the Early Church to today. We meet in person at Pilgrim Congregational Church, 460 Lake Street, in Oak Park. Or you can join online via FB Live.