MASTER OF THE SEA

By adminOctober 8, 2020Weekly Update
No Comments 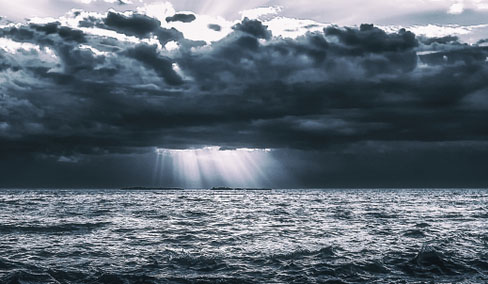 As Genesis rolls out its Creation narrative, arranging the elements becomes the first concern after the creation of light. The primordial world needs organizing! The sky is hung above the sea. Dry land is summoned from the ocean floor and plants take root. Days Two and Three complete and “God saw how good it was” (Gen. 1:12).

The heavens are the exalted domain, where God resides, watches from, and comes from to intervene in our affairs. The land is where we live, where our food and raw materials come from. It’s the stuff we’re made of. That takes care of land and air. What of the sea?

For the ancients, the sea epitomizes chaos. It’s unpredictable, mysterious, and often treacherous. It supports strange life forms that can’t be found anywhere else. Things change quickly at sea. A sudden squall can turn smooth sailing into a nightmare.

That’s why so many myths and legends valorize sailors: Odysseus, Sinbad, and other maritime heroes who overcome sea monsters and nymphs luring them to certain death all come to mind. In our own time, we abide a number of sea myths, most notably the story of the Bermuda Triangle, where sailors and pilots vanish for no reason.

The prominence of sailors in so many folklores sparks curiosity about why neither the Hebrew Bible nor the Christian texts ever focus on a sailor. It could be argued the Jewish nation simply wasn’t a seafaring culture. Yet that’s also curious, since it sits on the Mediterranean shore, at the trade crossroads that joined the East and Europe. There might be something more significant than geography going on here.

Genesis positions God as the Master of the Sea. The deep’s power is mediated when God calls forth land. Its dangers are contained, its threats minimized by the decision to create a home for humans on dry ground. Meanwhile, although scripture doesn’t give us one heroic sailor, it gives us plenty of nautical episodes, nearly all of which go sideways. Jonah, the disciples, and the Apostle Paul are subjected to harrowing storms and (in Paul’s case) even shipwreck. Yet all of these tales end happily with divine intervention. Whatever other lessons there are, the underlying moral is always the same: God alone is the Master of the Sea.

We live in tumultuous times of uncertainty and near-constant squalls. The stormy seas of existence feel less like a metaphor and more like lived reality. No sailor heroes are emerging in our story to lead us home. But we aren’t dismayed because our trust is too precious to invest in a mere sailor. We place our confidence in the Master of the Sea. As the sailor-poet of the great hymn “Amazing Grace” put it, “‘Tis grace hath brought me safe thus far / And grace will lead me home.” Amen.

If you’re not catching our October series “Creation Across Culture” you’re missing a treat. Join us each Thursday evening at 7:30 CDT via Zoom: