By adminAugust 6, 2019Weekly Update
No Comments 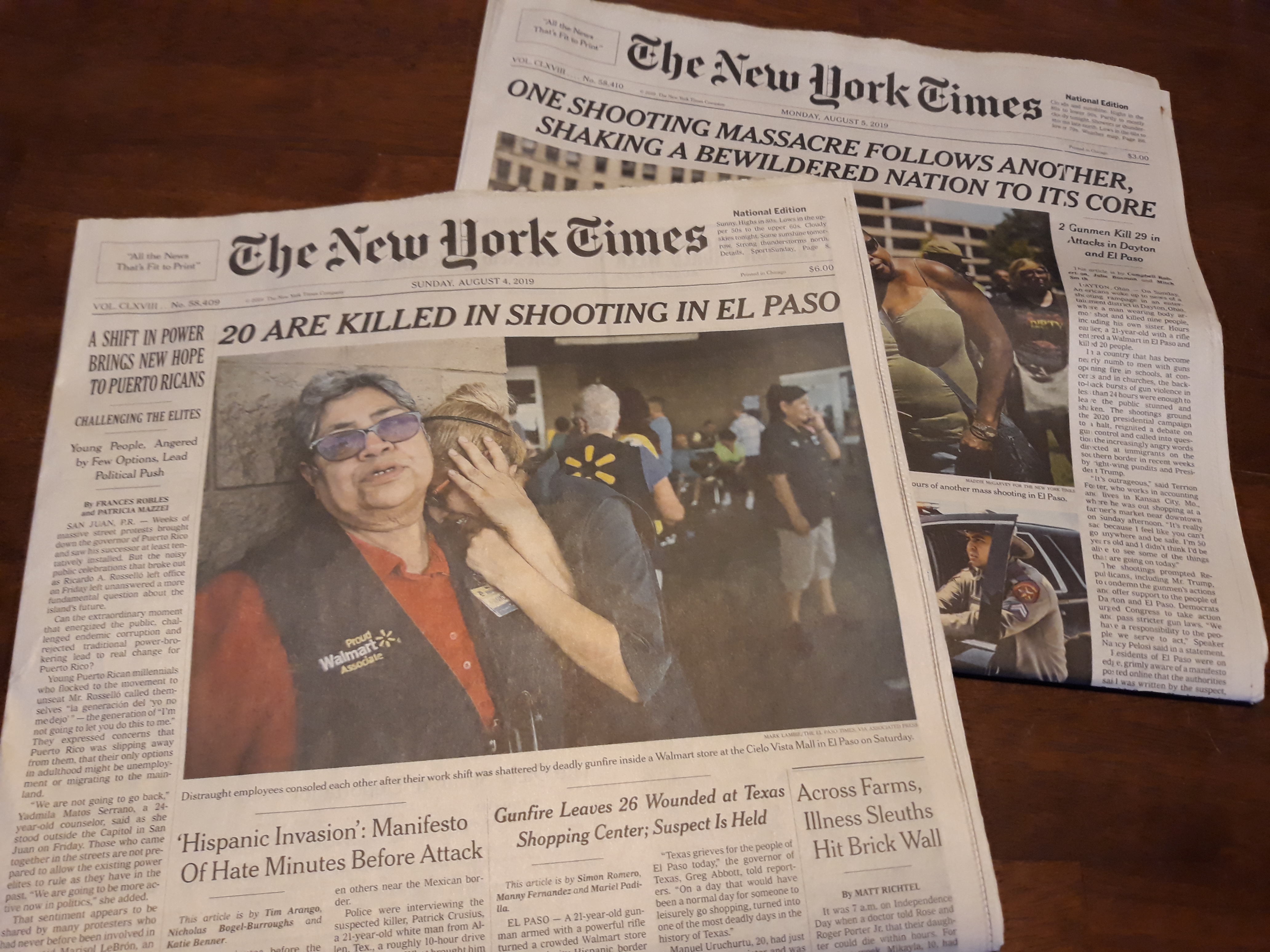 Nearly every morning begins the same way. I put the kettle on to make coffee (French press here) and open the door to pick up The New York Times. I get it online, but I still like to hold the paper in one hand and cup of coffee in the other. It’s a tactile thing, a ritual jumpstart to the day.

When this morning’s headline read, “ONE SHOOTING MASSACRE FOLLOWS ANOTHER, SHAKING A BEWILDERED NATION TO ITS CORE,” a stabbing pain pierced my soul. I flashed back on so many headlines on so many mornings—Columbine, Sandy Hook, the Pulse Nightclub, Las Vegas, Parkland, Pittsburg, Poway; we can all recite these lists—and how after each one we tried to comfort ourselves with hope that this would be the one that turns things around… this time the response would be different.

Every time those hopes melted away. After several news cycles, the conversation changed. The stories about lost lives and traumatized victims and haters and heroes slipped “below the fold” as they say in the newspaper biz and eventually slid from sight.

Have we become habituated to mass shootings and gun violence? How close are we to accepting it as the new American way of life? How do we satisfy our longing for a rational response to irrational evil while our spiritual compasses keep whirring and we can’t seem to get our bearings?

In a way that’s not always good, we’ve been conditioned as Christians to default to tolerance and forgiveness as the only right responses to wrongdoing. We’ve been taught to love in spite of rather than because of. When we see something egregiously wrong, our first response is to go into kind, tolerant, and hence quiet mode.

We’ll talk about the evils of the world all day long among ourselves. But confronting sins in society and culture, sins in public offices and legislatures, sins in the mouths and politics of our families, friends, and neighbors? We turn into Auntie Ems from The Wizard of Oz, who told the witchy Almira Gulch, “For 23 years, I’ve been dying to tell you what I thought of you, and now… well, being a Christian woman, I can’t say it!”

Why couldn’t Auntie Em say it? Why would truth-telling not be the right response for a Christian?

In James 4:17 we read, “It is a sin when someone knows the right thing to do and doesn’t do it.” In 2019 America, being Christian—truly Christian, guided by real convictions that reflect the teachings and life of Christ—is a de facto outsider position. Nominal Christians walk the halls of Congress and hold civic power. But their fruits (or lack thereof) expose them as mountebanks and lip-service believers. But they’re not Christians. If they were true Christians, we wouldn’t be having this conversation.

Those of us outside the circles of power have the responsibility to use our outsider voices to speak truth to this faux Christian power, from the highest levels of government down to the hoodlum preachers and heretical churches that trample the name of Jesus in their quest to propogate ideologies that bear no resemblance to authentic Christian belief and behavior.

What’s happening in America is a sin. And we need to say so. Not only from our pulpits and “intentional” conversations. We need to call sin “sin” in the hearing of those who are committing, supporting, ignoring, and profiting from sin.

We know that guns in the hands of civilians are bad. We know what good looks like. And those who have the power to change things so that lives are saved and peace is restored are doing nothing. This is sinful. They are sinners.

We need to overcome our milquetoast Christian politeness and call sin “sin” in places where we’ll be heard—at family dinner tables, in neighborhood conversations, at our places of work and play. As outsiders, we have nothing to lose, beyond making the sinners around us angry. And they’re angry anyway. They’re angry all the time. They are tools of an oligarchy that makes billions off the anger of insecure, ignorant people.

The oligarchs are sinners; they know whipping up their constituents with fear and fallacy is not right. So are the people who know supporting a gun lobby and an armed civilian class is not right. What’s happening with guns in America is sinful. What’s not happening to end gun violence is sinful. Not saying so out of fear of offending the merchandizers and missionaries of wholesale murder is sinful.

Use your outsider voice to call sin “sin.” Say so.

Don’t miss another fascinating chapter in this summer’s “Disorganized Religion” tour of Acts. We meet on Thursdays at 7:30pm CDT, in person at Pilgrim Congregational Church, 460 Lake Street, in Oak Park. Or you can catch us online via FB Live.