By adminMay 14, 2019Weekly Update
No Comments 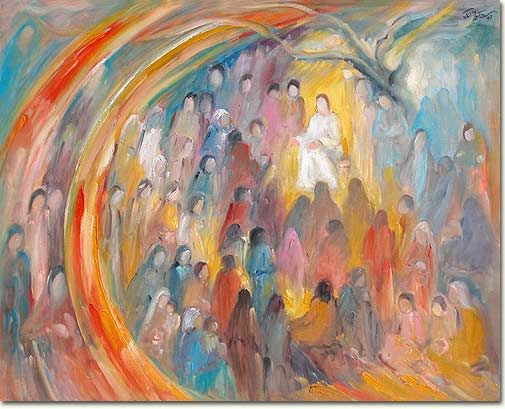 When Enough is Plenty

Tim: This week we turn to The Beatitudes.

Shea: This is Jesus as it his most quotable, poster-ready, and meme-friendly.

Tim: It sure feels that way. Although they’re rendered differently in Matthew and Luke’s Gospels, both sets clarify Jesus’s agenda. This kingdom of God idea he’s bringing to his followers is meant to upset everything.

Shea: Oh yes! The Beatitudes is where Jesus flushes out his great theme—a divinely ordained reversal that turns every human value and expectation upside down.

Tim: If you look at how Matthew organizes the discourse, often called The Sermon on the Mount, Jesus makes it plain that his notions of happiness and wholeness are rooted in faith in God’s abundance. That surely challenged an audience whose daily realities were steeped in scarcity, deprivation, and profound need.

Shea: We can’t read the Matthew or Luke accounts without forgetting that Jesus’s followers suffered under Roman occupation. They were so heavily taxed household staples like bread and wine often amounted to luxuries. They had no power to define their own fates. They had no expectations of being protected. Nagging uncertainty defined their lives.

Tim: And here comes Jesus, telling them they’re looking in the wrong direction. God’s power, provision, and protection have no limits. Their wellbeing and happiness cannot rely on pipe dreams of Roman defeat. They come from recognizing they already have more than they think. What seems like barely enough is plenty plus.

Shea: That surely must have been a hard idea for them. I imagine many who listened to Jesus had empty stomachs and wills so weak they struggled to stand in their own strength.

Tim: Yet, according to Jesus, they’re closer to being happy and knowing fulfillment than those who have power and wealth.

Shea: Why is that?

Tim: Their dependency rests entirely in their Maker and Keeper. All the systems have failed them. They’re poor. They’re grieving. They’re beat down. They long for justice.

Shea: Without any advantage, they’ve discovered the power of mercy, integrity, and reconciliation. When their ability to embrace these values puts them in the crosshairs of persecution, they keep their looking toward the always-abundant kingdom of God, where real power, provision, and protection prevail.

Tim: These are the happy folk, Jesus says. So the subtext here is that human misery arises out of insecurities that plague us when we work from the notion that there isn’t enough to go around.

Shea: An attitude of insufficiency is no way to live.

Tim: Amen to that! God is abundance personified. That’s the headline here. Enough is plenty. We’ll dig into this idea more deeply in our three-week look at the Beatitudes.

Join us this Thursday as we open our three-part series, “The Gospel Guide to Happiness: Believing & Living the Beatitudes.” We meet at 7:30pm in the chapel of Pilgrim Congregational Church, 460 Lake Street, Oak Park or online at FB Live. See you this week!